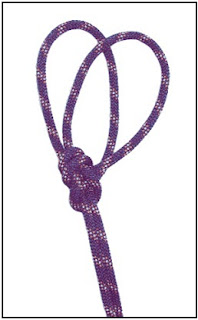 The bowline-on-a-bight is used to form two fixed loops in the middle of a rope. It is a middle rope knot. 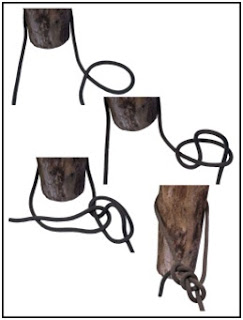 ROUND TURN AND TWO HALF HITCHES

This knot is used to tie the end of a rope to an anchor, and it must have constant tension. It is an anchor knot.

STEP 1. Route the rope around the anchor from right to left and wrap down (must have two wraps in the rear of the anchor, and one in the front). Run the loop around the object to provide 360-degree contact, distributing the load over the anchor.
STEP 2. Bring the working end of the rope left to right and over the standing part, forming a half hitch (first half hitch).
STEP 3. Repeat STEP 2 (last half hitch has a 4 inch pigtail).
STEP 4. Dress the knot down.

Charlie
Posted by Charlie at 11:21 PM

Email ThisBlogThis!Share to TwitterShare to FacebookShare to Pinterest
Labels: knots