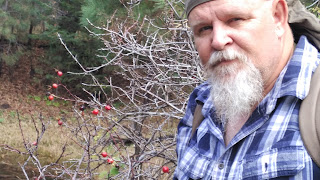 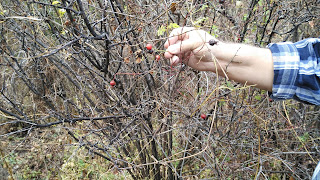 Rose hips are used for herbal teas, jam, jelly, syrup, rose hip soup, beverages, pies, bread, wine, and marmalade. They can also be eaten raw, like a berry, if care is used to avoid the hairs inside the fruit.

A few rose species are sometimes grown for the ornamental value of their hips, such as Rosa moyesii, which has prominent large red bottle-shaped fruits.

Rose hips are commonly used as a herbal tea, often blended with hibiscus, and also as an oil. They can also be used to make jam, jelly, marmalade, and rose hip wine. Rose hip soup, "nyponsoppa", is especially popular in Sweden. Rhodomel, a type of mead, is made with rose hips.

Rose hips can be used to make palinka, a traditional Hungarian alcoholic beverage, popular in Hungary, Romania, and other countries sharing Austro-Hungarian history. Rose hips are also the central ingredient of cockta, the fruity-tasting national soft drink of Slovenia. 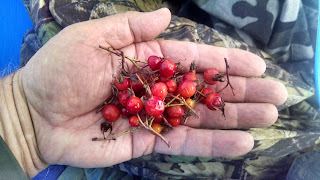 Rose hips are particularly high in vitamin C content, one of the richest plant sources available. However, RP-HPLC assays of fresh rose hips and several commercially available products revealed a wide range of L-ascorbic acid content, ranging from 0.03 to 1.3%.

Rose hips of some species, especially Rosa canina (dog rose) and R. majalis, have been used as a source of vitamin C. During World War II, the people of Britain were encouraged through letters to The Times newspaper, articles in the British Medical Journal, and pamphlets produced by Claire Loewenfeld, a dietitian working for Great Ormond Street Hospital for Sick Children, to gather wild-grown rose hips to make a vitamin C syrup for children.

Rose hips contain the carotenoids beta-carotene, lutein, zeaxanthin and lycopene, which are under basic research for a variety of potential biological roles, such as inhibiting oxidation of low density lipoprotein.

A meta-analysis of human studies examining the potential for rose hip extracts to reduce arthritis pain concluded there was a small effect requiring further analysis of safety and efficacy in clinical trials. It is not considered an appropriate treatment for knee osteoarthritis. 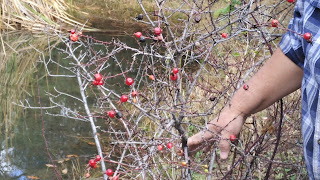 The plant is high in certain antioxidants. The fruit is noted for its high vitamin C level and is used to make syrup, tea and marmalade. It has been grown or encouraged in the wild for the production of vitamin C, from its fruit (often as rose-hip syrup), especially during conditions of scarcity or during wartime. The species has also been introduced to other temperate latitudes.

During World War II in the United States Rosa canina was planted in victory gardens, and can still be found growing throughout the United States, including roadsides, and in wet, sandy areas up and down coastlines.

In Bulgaria, where it grows in abundance, the hips are used to make a sweet wine, as well as tea. In the traditional Austrian medicine Rosa canina fruits have been used internally as tea for treatment of viral infections and disorders of the kidneys and urinary tract.

The hips are used as a flavoring in Cockta, a soft drink made in Slovenia.
[Source: Wikipedia]

Rose hips produce a mild, tangy, fruity tea. Use them solo or combined with a hint of fresh spearmint or peppermint leaves. Chilled and sweetened with stevia, the tea is a vitamin-rich, sugar-free alternative to fruit juices or Kool-Aid that is appealing to kids and adults alike.

1) Combine 4 rounded teaspoons cut-and-sifted rose hips (ground in a spice mill or not) or 4 tablespoons whole dried rose hips with 4 cups of water in a nonreactive saucepan. Cover, bring to a boil, then simmer for 5 minutes.

2) Alternatively, place fresh or crushed dried rose hips in a warmed teapot, pour boiling water over them, and steep, covered, for 10 minutes.

3) Strain the tea and sweeten if desired with a scant 1/8 teaspoon stevia extract powder or 2 to 4 drops glycerin-based stevia liquid extract per cup. Serve immediately or cool and refrigerate, covered, for as long as 3 days.

• Steep (or simmer if following first recipe) 4 to 6 fresh spearmint or peppermint leaves (2 to 3 teaspoons dried) with the hips.
• To make a punch, chill sweetened tea, add the juice of a fresh lime per quart of punch if desired, and serve over ice.